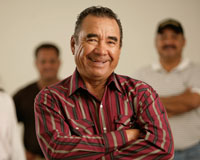 Much of the success of Imperial Date Gardens is due to personal pride and close attention to product quality.

The date is one of the oldest cultured tree crops, with records showing that in Mesopotamia, it was cultivated more than 5,000 years ago.This valuable food helped sustain desert peoples and nomadic wanderers of the Middle East and North Africa. Dates were also considered a delicacy and served by royalty for countless generations. Medjool dates are the gourmet variety, and for many years savored only by the elite. The date was introduced to the western hemisphere by Spanish missionaries, who planted date seeds around the missions in the late 18th and early 19th centuries. A few of the original palms or their off shoots are still found in Southern California and Mexico. There were many varieties imported in the following years, but the most signifi cant was the Medjool date. The Medjool originates in Morocco. It was introduced into the United States in 1927; the eleven original shoots were placed in quarantine for seven years in the state of Nevada. Nine plants survived, and in 1935 they were located to Southern California. Twenty-four off shoots of those original trees were planted in the Bard Valley, in 1944, by Stanley Dillman, date pioneer in the region.

The Medjool is the only variety of date that is picked fresh and eaten fresh. Medjool, because they are fresh, are the most labor intensive date to grow and harvest

While working as a farm laborer for Clyde Bowman, also a Bard Valley pioneer, Isabel Nunez discovered he was strongly fascinated by date cultivation. Mr. Nunez worked hard to realize his dream, and in 1972, purchased his first date farm. Under his loving care the date farm thrived and a few years later, he acquired Imperial Date Gardens, Inc. By increasing acreage and yield over the years, Imperal Date gardens matured into a leader of Medjool date production. The prosperity has lead to expansion of facilities, including a retail and gift shop and an increasingly popular mail order program. Much of the success of Imperial Date Gardens is due to the personal pride and close attention to product quality, that Isabel Nunez and his family show to there sweet Medjool dates. Although there are 200 employees or more at the peak of the season to tend the operation, Mr. Nunez can be seen working shoulder to shoulder, personally nurturing his product, ensuring only the dates that meet his highest standards will be allowed to represent Imperial Date Gardens.

At Imperial Date Gardens, "heritage agriculture" is a way of life. Isabel Nunez came to Bard Valley in 1958 as a farm laborer working for a pioneer medjool grower. Fueled by the passion and wonder of this fascinating crop, he worked hard to create his own operation. Nearly 40 years after acquiring Imperial Date Gardens, Isabel still works in the date gardens, but now he is assisted by his children, Gus, Ramon and Mari, and his grandson, Brandon. Imperial Date Gardens has matured into being the largest Medjool Date producer in Bard Valley. This is a true American success story!

Our number one Medjool. Only the most moist and succulent dates are hand-selected for this grade of superior quality. Shop Jumbo Medjools

Same quality as our JUMBO Medjools, but slightly smaller. They are still unusually large, with a smooth velvet texture and exquisite taste. Shop Large Medjools